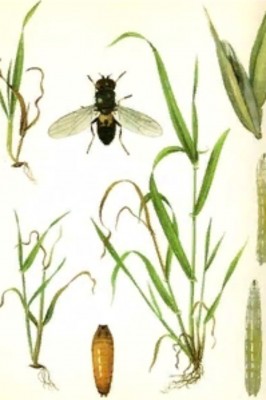 Grass flies are small flies of black, gray, yellow, or greenish color, with dark stripes on the midrib. Larvae with a cylindrical body, greenish or white, always live in the tissues of the plant.
As a rule, the larva of the onion fly inhabits one grain (with the exception of the Hessian, in which many voracious larvae can settle on one stalk).

Depending on the type of cereal flies and the condition of the plant at the time of infection, the following parts of plants may be damaged: seedlings and young shoots (in this case, the whole plant or only the damaged shoot dies); generative shoots that have emerged into the tube (the larvae destroy the rudiment of the ear, and the shoot does not bear fruit); generative shoots before earing (the larvae eat part of the spikelets and damage the spikelet); grains in the spikelets. Under unfavorable conditions for the development of plants, thinning of crops occurs. The surviving plants have a reduced yield and grain quality. If the formed ear is damaged, individual spikelets are destroyed, the ear becomes chipped. When the larva develops on the spikelet, the ear turns white and does not give grain.

In addition, there is a fairly large group of species whose larvae feed on dying plant tissues and usually accompany the main harmful species.

Eggs are usually laid on the plant, on the leaves, behind the coleoptile (the first leaf of cereals after the cotyledon), in the leaf axil, sometimes on the soil near the plant. Pupation occurs in the damaged plant. In autumn, the eggs are laid mainly on the plant in the phase of 2-3 leaves, and the larvae appear just before the beginning of tillering, when the growth of the central shoots slows down.

In the spring, the flies fly out in the fields of winter wheat, where the plants have bloomed since autumn. Then they migrate to the seedlings of cereal crops to lay eggs.

For accounting, an entomological net is used, and on underdeveloped crops, blue water traps (a shallow 10-12 cm and a wide 20-25 cm container painted blue from the inside) are filled with water with the addition of a drop of shampoo to reduce surface tension.

The colonization of plants with the eggs of cereal flies is determined in the field. Oblong, white pest eggs up to 1 mm long are easily detected behind the vagina of the outgoing leaf. Under artificial lighting, eggs are difficult to detect.

In the spring, chemical treatments against cereal flies are advisable on winter wheat crops that have lagged behind in development, with the number of flies not less than 50 specimens per 100 strokes of the net.

1. Peeling of stubble with subsequent plowing.